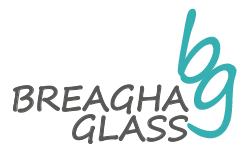 Breagha Glass began as a hobby, developed into a passion & naturally a small business evolved, the transition part of a bigger ambitious lifestyle change with imminent retirement the catalyst & influenced by a creative desire to change tack.

Lynn qualified as a registered nurse in the 1970's specialising in Intensive Care within the NHS & also overseas.

Whilst living in Australia, Lynn had an introduction to glass leading & copper foil methods, & on return to Edinburgh in the 1990's studied at Telford College & attended classes at Edinburgh School of Art.

Eventually settling in Highland Perthshire & finally fulfilling the dream has culminated in the launch of Breagha Glass in 2014, an exciting new venture from her glass art studio in Keltneyburn.

Breagha Glass products can be bought at various venues. Click here to see dates of upcoming events at Art & Craft Fairs and Markets